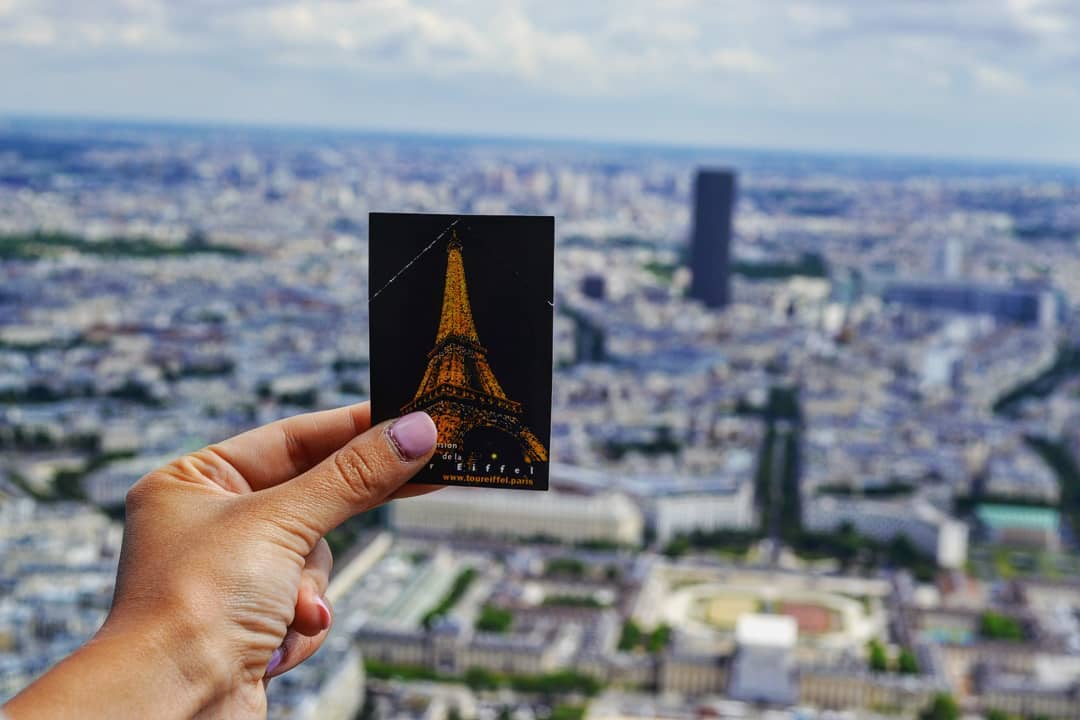 It is funny how one can travel now, especially within the European borders. Flights at a minimal cost, fast track and… voilà, you have arrived at your destination! Enjoy your stay!
As for me, during the last decade, I have been crossing countries out of my bucket list, in an attempt to visit as many as I can and experience different cultures. From the East to the South, Balkan countries, Meditterenean, Central Europe etc.
But, so far, it hasn’t happened to me to prepare my suitcase for a trip to this one city called as the most romantic place in the world: Paris, capital of France.
Luckily, when the idea came up, there were plenty services with direct flights from my city. And the choice was easy! I have to thank my sister who insisted for this trip whatsoever! I booked the ticket, I counted days until the departure time to come and hurray… I was flying to Paris!
I landed with safety and a cloudy sky welcomed me as I took the bus to the city centre. It wasn’t something ideal when I wanted to get a first glimpse of the city but I had to be patient.

At a fast pace, I ended up at the place I was going to stay for the rest of my trip, outside to the suburbs of the city. A site where the silence could provide the needed relaxation when I had to return back from each daily wandering.

Next top on the list, Moulin Rouge and anything that could be found along the area of Montmartre! Surely, I learn more about the city without checking Google Maps all the time, so I have to apply this also.

Thus, I roamed around narrow alleys that head upwards, found the well known spot of the Love Wall (where somebody could find the common phrase “I love you” written in 250 languages from Chinese and Arabian to Ancient Greek and Latin), to the Place du Tertre (where people pose for a portrait from artists) and to another part of the town where from the top, you could get the glimpse of the surroundings with a better sight: that of Montmatre’s sacred basilica. A big, white colored building,the Basilica of Sacré Cœur as it has been named, looms over the city. People, citizens and tourists, gather around and sit on the steps, drinking beers and enjoying the breathtaking view of the city.

What I came to find out quickly in Paris, was that the weather could change from a gloomy sky into a sunny one but its mood is always unstable. While I decided to head back to the place I was living, storm broke out. I arrived at my storm shelter in a unappealing condition, wet from the top to the bottom. Better leave this memory back in my memory’s chest.

The next day greeted me with a really different weather: sunny sky, few clouds and a feeling of warmth to my body, but still, wasn’t at its best. Since I was skeptical, due to the previous day’s incident and I didn’t trust the forecasts, I chose to start with one of the most iconic places in Paris: Louvre Museum.

Remember those scenes from Da Vinci Code? Well, now I had to explore the building, its exhibitions and the whole architecture that has been used to house many Greek, Roman, Egyptian etc antiquities like Aphrodite of Mylos, Winged Victory of Samotrace etc as well as well – known paintings from Leonardo Da Vinci, Delacroix, Rembrandt etc.

Until I arrived at the entry point, I had to wait for, not one, but two queues. Well, here in Paris also, if you are under 26, you get in most of the museums for free. For me, based on a French guy’s opinion, after checking my passport, I was older for two months so I had to pay. Like if you ask me now, I will answer I am 27 already and not younger. Anyway…

Louvre Museum is a huge site, that has been built upon a fortification dated back on 12th centure AD and got its name probably from the place name “Lupara” – from the latin lupus = wolf due to pack of wolfs that used to live in there. Later, it changed to a museum after the French Revolution, ending up as one of the biggest art places around the globe. And since it was huge, almost 4 hours, excluding the wait at the queue, were needed to get an almost complete view of each exhibit, and still I couldn’t see all of them.

Of course, I had to pose for a photograph to remember my visit in there. Thankfully, the weather was far better than in the morning, so it made it ideal for admiring and photographing its outside landmarks.

After I took the usual photos in front of the Louvre Pyramid made out of glass, well known landmark of Louvre, I took the metro to another famous place of the city, Pantheon, where I had to meet with my cousin. And, there I had the chance to taste a real French crepe! Well, kind of special for me.

Next on my list, Jardin de Luxembourg or else, the Garden of Luxembourg. A colourful and developed park which attracts many tourists because of its flourishing beauty, and also French people who choose it for relaxation and sport activities. It gives you a warming vibe as you enter.

Leaving the Jardin, close to that, there is another famous landmark, that has been carved in my childhood memory through a Disney classic animation: the Cathedral of Notre Dame. This gothic style Catholic church built during the medieval period has inspired many stories but the most well – known, that of the dysmorphic Quasimodo and the gypsy Esmeralda. So, my second day ended up admiring the western facade of the cathedral.

Next morning, Paris came out of its shadows for good and showed me its sunny, marvelous face. Following the nice weather and the limited amount of clouds on the sky, I chose to go for a longer tour across the Sicuana.

Starting from the Arch of Triumph, (built during 1806 to honour those who fought and died for France in the French Revolutionary and Napoleonic Wars ), I walked along the Avenue Champs-Élysées (famous for its cafes, luxury shops and theatres) to the Grand Palace and from there I followed the road to the river until the Eiffel Tower appeared in front of my eyes. I had to cross another thing from my bucket list.☑

Luckily, the warmth of the day continued as I reached the bottom of the tower, waited again two long queues, one for security reasons and another because I hadn’t planned properly to buy my entry ticket in advance. When I finally passed in to the elevator that was supposed to get me to the top, I was thrilled.

It was an experience like no other, mostly for those who hadn’t been in higher buildings before and especially in a construction of such importance thought to be one of the seven wonders of the modern world. Eiffel Tower was the tallest building during the end of 19th century until Empire State in NY took its crown at 1930. Nowadays, there are more building higher in size than Eiffel Tower. Yes, Burj Khalifa is the new king!

Of course i had to explore the garden with the fountains in front and at a close distance from the tower: Trocadero. There, many tourists were taking photographs in common or unusual positions with the symbol of Paris on the background. I took mine after many attempts.

I continued wandering along Sicuana passing by the bridges, Place de la Concorde, through Jardin des Tuileries (another wonderful garden park) and i finished my walk in front of Bastille, drinking Sauvignon.

As much as I wanted to visit Versailles or go to Disneyland, the weather changed its mood again: gloomy and moody. So, I had to spend the last day somewhere with a roof over my head.

Orsay Museum seemed like an ideal choice. Built during 1898 this place houses many well-known and important works of painting and sculpture from artists like Van Gogh, Monet, Cezanne, Rodin,Gauguin etc. That was the last museum I spend my time in. Too much culture in this trip!

Last but not least, I walked along the sideways in Place de la Contrescarpe, drunk coffee in a “petite cafe”, eat another crepe (this time from a well-known place in Paris owned by… Greeks!) and later on I enjoyed a glass of wine, as the rain has started. And this was a perfect time for my trip to be completed!

And, as I have read a quote somewhere:

“I think Paris smells not just sweet but melancholy and curious, sometimes sad but always enticing and seductive. She’s a city for the all senses, for artists and writers and musicians and dreamers, for fantasies, for long walks and wine and lovers and, yes, for mysteries.”

Au revoir, until the next time Paris 🇫🇷

Hello there! I am Harry, a fellow travel, writer and daydreamer, a Grec (Greek) on Trek. Welcome to my blog where I collect moments ended up as travel stories! For your eyes only!
Take a look around, you may find lot of surprises!